There are several types of rat poisons available. The traditional products (and best known) are called anticoagulant rodenticides and those are ones that I will discussed here. If you intend to use a rodenticide I encourage you to choose this type over others as there is a readily available antidote for the anti-coagulant rodenticides.

Everyone should be aware of the signs of rat poisoning, particularly if your pet travels with you to places outside the home where bait may be left out. 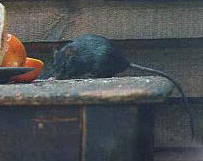 Most of the time external bleeding is not obvious and one only notices the pet is weak and/or cold. If one looks at the gums, they are pale. Sometimes bloody urine or stool is evident or nose bleeds may be seen. Signs of bleeding in more than one body location are a good hint that there is a problem with blood coagulation and appropriate testing and treatment can be started.

Anticoagulant rodenticides cause internal bleeding. A poisoning victim will show weakness and pallor but bleeding will likely not be obvious externally.

Anticoagulant rodenticides do not produce signs of poisoning for several days after the toxic dose has been consumed.
How Does Rat Poison Work?

In cases of poisoning one would expect symptoms to be nearly immediate, but in the case of anticoagulant rodenticide poisoning it takes several days to deplete Vitamin K. After that, even the smallest of jostles and traumas can lead to life-threatening bleeds.

The anticoagulant rodenticides tie-up Vitamin K and prevent clot formation. This means that as soon as one’s active Vitamin K reserves are depleted, there can be no meaningful blood clotting.

Testing — Blood clotting tests of the intrinsic and extrinsic pathways are called the PTT (“partial thromboplastin time”) and PT (“prothrombin time”) respectively. If both of these pathways show disruption, rat poisoning is the most common cause. Not all veterinary hospitals have the capability to test PTT and PT in hospital. Many hospital must send these tests off and won’t get results back for 24 hours. Most of these hospitals will perform a “clot time” (and there are various methods of doing this), if rat poison is suspected.

Therapy — If the patient has only just ingested the poison, he or she may be made to vomit it up. You can give Hydrogen peroxide by mouth to help induce vomiting.

Give full strength (3%) hydrogen peroxide by mouth at a dosage of 1 tablespoon (15cc) per 15 to 20 pounds of body weight, or syrup of ipecac (follow label directions)

Your veterinarian might use cathartics and adsorbents to prevent the poison from entering the patient’s system. Still, it is prudent to use the antidote anyway. Certainly, if there is evidence that the patient is bleeding, the antidote obviously is required.

The antidote for Rat Poison is simply Vitamin K.

Vitamin K is generally started as an injection and when the patient is stable. Tablets are prescribed. The human formulation, available at most drug stores by prescription, is a 5 mg tablet. The veterinary strength is a 25 mg tablet. Blood transfusions may be needed to stabilize a patient who has suffered significant blood loss if the poisoning was not found until later.

There are different classes of anticoagulant rodenticides and they remain in the body for several weeks. It is hard to know when to discontinue therapy, especially if the particular rodenticide is not known. After a couple of weeks of therapy, medication is discontinued; 48 – 72 hours later another clot time is performed. If there is still rodenticide in the patient’s system, the clot time will be abnormal but the patient will not yet have started to bleed. The results of the test will tell the veterinarian whether or not another couple of weeks of Vitamin K are needed.

There is no point to doing a clot time test while the patient is still taking Vitamin K. The test must be done 48 -72 hours after discontinuing the medication.

It is very important to return for the recheck a clot time on schedule. Waiting an extra day or two will allow internal bleeding to recur.

The Pet that Eats the Poisoned Rodent — I am commonly asked about the risk to dog who eats a rodent that has been poisoned with rat poison. The rodent might have been poisoned, already died, or be in the process of dying when the dog finds it. The fact is that when one is talking about the newer generation rat poisons, the risk is very real. A greedy rat can eat enough poison to kill 20 rats before he starts to feel sick and if a dog or cat eats the rat, the poison is transferred.

If you think your pet might have been poisoned by rat poison, I recommend contacting your local veterinarian immediately. It will be much cheaper to be “safe rather than sorry” and by waiting to see if he/she shows signs of poisoning, you may cause your pet undue suffering and your pocketbook an excess expense.

Poisoning by antifreeze, or ethylene glycol, is one of the most common small animal toxicities. Every year, by some estimates, about 10,000 dogs and cats are victims of accidental poisoning by automobile antifreeze. Antifreeze is extremely toxic –most brands of commercial antifreeze consist of 95 percent ethylene glycol. Even a few licks of this sweet-tasting liquid can be fatal to a cat or dog. (For a medium sized dog, ingestion of about 2 ounces (3-4 tablespoons ) is toxic.) Many people aren’t aware that another source of antifreeze are the decorative “snow globes” glassware. The liquid in the these displays contain 2% antifreeze and are very toxic as well.

Snow Globes are a source of antifreeze poisoning!

Both cats and dog are attracted to the smell and taste of ethylene glycol. Remember to watch your driveway for a puddle of greenish-colored liquid. Your car can leak coolant at any time. Flush the area with plenty of water and don’t delay locating and fixing the leak. Another method of quick clean-up is to spread cat litter on the spill, clean up with rags (which are bagged immediately) and then rinse. Antifreeze will biodegrade in the environment, but it takes weeks or months to do so, so removing the spill is absolutely essential.

Stage 1: Absorption after ingestion is rapid and initial signs occur within 30 minutes to 12 hours. Ethylene glycol is an alcohol; hence during the initial phase the animals appear “drunk” and consequently exhibit many of the classical signs associated with alcohol intoxication: staggering, stumbling, and in-coordination. Vomiting, nausea, extreme thirst, and frequent urination are also observed. Some animals simply sleep through this period and owners are not aware that poisoning has occurred.

Stage 2: At the end of the first phase, the clinical signs resolve and the animal appears to have recovered. The second phase of intoxication occurs 12 to 24 hours after poisoning. The heart rate and breathing rate are rapid, but this is rarely noticed by owners.

Stage 3: Unfortunately, most dogs and cats poisoned with antifreeze are not recognized until the third stage. Ethylene glycol is converted by the liver to more toxic substances (metabolites) that are responsible for the majority of injury to tissues including the kidney, liver, lungs, and heart. Signs of kidney failure include severe depression, vomiting, and diarrhea. The kidneys stop producing urine and toxins normally excreted by the kidney build up in the body, resulting in a life-threatening situation. Once metabolism of the ethylene glycol has reached a certain point, there is no way to stop it. The body creates crystals (mainly in the kidneys) that are insoluble, and there is no way to remove them from the body.

Getting the dog to a veterinarian is critical within the first 9-12 hours following ingestion. After that length of time, the liver will have already begun metabolizing the ethylene glycol into substances that cause kidney failure and ultimately death.

If Antifreeze is suspected:
If you see your dog lick up some split antifreeze, give him/her something to induce vomiting IMMEDIATELY! Hydrogen peroxide can be used for this, if you have it on hand. If not, take your pet to the veterinarian immediately! These are very short term fixes and not a cure. The faster your pet is treated by a veterinarian the better the chances of recovery. Again, this poison is extremely toxic.

Give full strength (3%) hydrogen peroxide by mouth at a dosage of 1 tablespoon (15cc) per 15 to 20 pounds of body weight, or syrup of ipecac (follow label directions)

Treatment: Treatment involves preventing absorption from the stomach, increasing removal from the body, and preventing the alteration of ethylene glycol to its more toxic components. If poisoning is witnessed, vomiting should be induced immediately and the stomach cleaned out with activated charcoal. You veterinarian will do this is you haven’t already. Then, they will most likely place a catheter and start intravenous fluids. Additional treatment depends on the stage of the disease.
If the animal is not in kidney failure, drugs to stop the metabolism of ethylene glycol or methods for directly removing the ethylene glycol and its metabolites from the body are indicated. Ethanol (alcohol) and 4-methylprazole (fomepizole; Antizol-Vet) can help stop the metabolism of ethylene glycol. However, these drugs must be administered within several hours of poisoning. They are ineffective when kidney damage had occurred.

If the animal is in kidney failure, techniques to support kidney function are required. Medications to encourage the kidney to produce urine are administered but are often futile, and advanced techniques such as peritoneal dialysis or hemo-dialysis that replace the function of the failing kidneys may be necessary. Both of these procedures require referral to a speciality center. Support must be provided until the kidneys can heal, which may take several weeks to months, and in some animals the damage is too severe and recovery is not possible. In these patients, kidney transplantation may be their only hope. 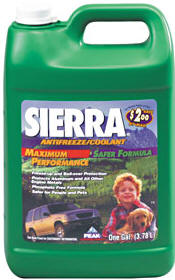 One step owners can take to prevent a potential tragedy from befalling their pets is to use a propylene-glycol-based antifreeze (less-toxic than ethylene glycol) in the car. Propylene glycol, on the other hand – although not entirely nontoxic – is considerably less toxic than ethylene glycol. These products do provide an added margin of safety in the event of accidental ingestion. However, it still can cause death if a large amount is ingested. In addition, the metals in your cooling system that corrode or dissolve into your antifreeze can also be harmful. For this reason, motorists should always exercise caution when using any type of antifreeze product. There are several nationally available propylene- glycol antifreezes on the market, including:

These products are available at most automotive stores and departments

Chocolate Poisoning
Chocolate was the most common agent causing poisoning in 1988. The two components of chocolate which cause toxicity are methyxanthines caffeine, and theobromine. Absorption of chocolate from the intestinal tract is very rapid.

Death is often due to heart and respiratory failure.