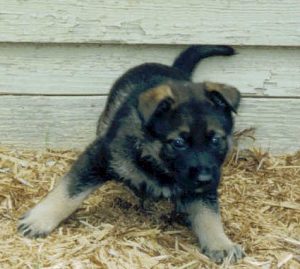 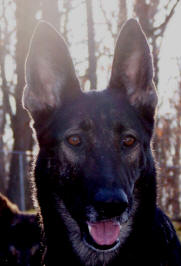 Raven is a favorite of our breeding lines. She is by far the most athletic of all the German Shepherds we have seen. When she was seven months of age you could look outside and see her standing on the cab of the 3/4 ton 4×4 truck (and the tailgate was up!) She was hurling to the top of 5-6 feet jumps by ten months. With an outgoing friendly personality she has been an excellent addition to our kennels. She is friendly to other animals, including cats and chickens. She is polite around children and she does exceptionally well when trail riding with the horses (naturally healing to the side of the horses without getting underfoot.) Raven has been OFA’ed on both hips and elbows. I also have had her PennHip certified and she scores in the upper 10% of the German Shepherd lines. That probably accounts for why she is able to clear 6 foot fences! 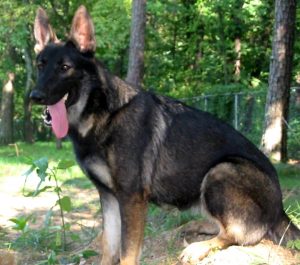 We had been putting off titling her for the last couple of years but we have now gotten her obedience title and are starting on protection and agility courses this year. She has proven herself an excellent mother and has raised pups that have gone on the be active member of several different search and rescue groups across the nation (Texas, Tennessee, Alabama, Georgia to name a few). She is now out to make a name for herself. She is scheduled to be bred in Spring of 2009. If you are interested in reserving a pup out of this litter, please feel free to fill out an application.

Raven is by far, my most proven female. She consistently throws solid, healthy pups that are known for their ease of training and superior hip scores. Raven is a third generation Sequoyah female. Her grandmother was my foundation female. This foundation was first and foremost build on hips, health, and orthopedics. At 8 years of age, Raven is still capable of going over my 5 and 6 foot fences. She does not climb them — at 72 pounds, she jumps 5 feet in the air from a flat stand still. She has the grace of a cat and her landings are effortless.

Raven tends to throw large, blocky males, with solid square heads. Oddly enough, she herself has a more narrow head. She is a heavy boned and well muscled female and tends to add size to her males pups, while often, the females are only average sized out of her breedings. This fact has been very beneficial in that she has produced several Search and Rescue females (in which size, health, and ball drive are all key features). Her pups also tend to be excessively dedicated to their owners.

This litter is being bred for: 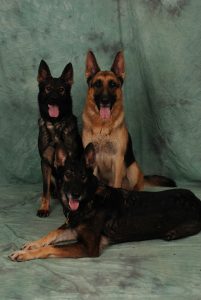