Kiah had puppies on 2/13!  She had 9 fat little healthy youngsters – 6 girls and 3 boys. Check back regularly for updates on pictures.  Thanks! 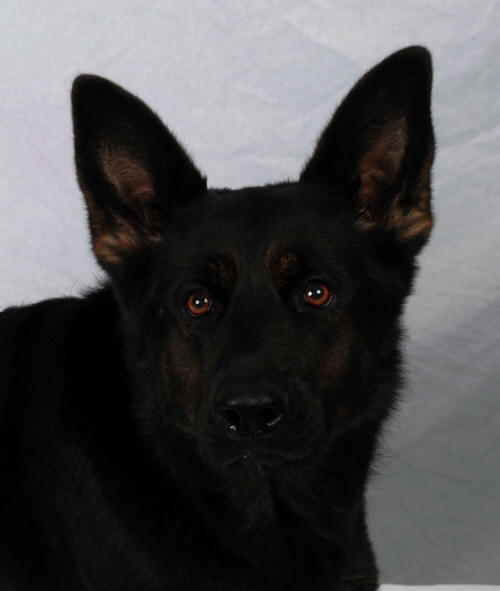 Kiah came in heat in December and was bred December 12th – 15th to “Thorn” of Camelot Shepherds.  These 2 dogs will produce nice pups for Family homes, active Companion homes, and Family homes looking for a start in Competition.  They will be beautiful puppies and may even have a few pure black pups out of the breeding.

Kiah is a compact, smaller female with  DDR / Czech background. She is a bicolor female with an EXCELLENT disposition.  She can be a trusted explicitly around children and is very self-confident in her environment. She is out of a long line of working dogs with her father being Esko vom Gräfental .  She has an easy disposition but her true claim to fame is her incredible herding instinct.  Give her a herd of cattle and she will show you her true calling. She is a good alarm dog and is just starting in Protection training.

Thorn, on the other hand, is a larger male.  He weighs in at roughly 90 pounds.  He is a GORGEOUS dog with a large expressive head.  He tends to stamp his puppies with that thick, DDR look. He comes from famous top working DDR bloodlines known for high level performance abilities along with very good structure.  His bloodlines include V Iltis vd Wildsau Congo Vikar, and Grim z Pohraniční stráže. He has been Penn hip certified and OFA prelimed with good hips. His Penn hip scores are .26/.37. Thorn is of the DDR linage which is known for it’s strong bone, straight lines and an intimidating look with large heads, broad shoulders and deep chests.  Thorn earned his Family obedience and Protection Alert titles in April, he took second place for his Protection Alert scoring 93pts out of a possible 100.   He is currently in training him for his Protection 1 title which he hopes to earn in early 2010.