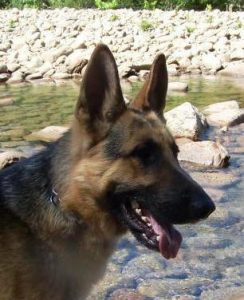 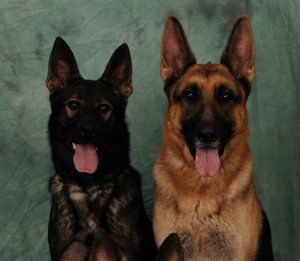 Judge is our most active addition. He has just past his Penn Hip certification and has scored very high indeed. He ranks in the top 20% of the German Shepherds as having some the the best hips around, especially for his size! (He is approaching 95 pounds.) He is just recently sired his first litter and we are following them closely to see how they turned out. We have great expectations for him and his offspring. He is the son of Logan and Santa Rio. I can’t wait for him to get a little older — his energy is driving me CRAZY! He is perpetual motion, jumping in and out of the back of the truck. (He will jump through the window too, if you will leave it down for him.) He has obtain both his Family Obedience and Protection Alert title in September 2007 and his Protection Dog 1 title in May of 2008. He trialed again in June of 2008 for his first Police Dog obedience title and competed in November of 2008 for his PD1 protection and PD2 obedience titles. Check out his Hips scores and titles!