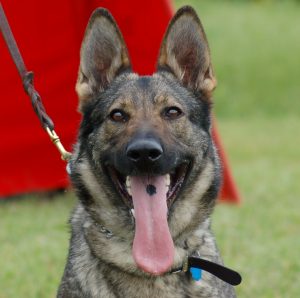 ALLEY is a wonderful addition to the Sequoyah family. We couldn’t be more pleased with her. She is a very strong, tough female with a friendly, social disposition but ready to go to work when you are. She is an easy dog to be around, perfect in the house or kennel, quiet and well-behaved but she has a strong bite, perfect obedience, solid tracking to go with that complete package! She is perfect as a family Protection/companion dog, as well as a tough sport dog. A Solid, self-confident dog! Watch for her upcoming achievements.

When I was considering putting videos on my site of some of the work that we are doing with these dogs, I ran across a problem. I realized that often times the average person looking for a family pet looks at some of the protection videos and says to themselves, “That is not the kind of dog I want — I just want a pet, not something vicious”. And the truth of the matter is that I typically sell most of my puppies for family pets. But, I also sell “working” dogs, and I did want to be able to show my “working” buyers what these females can do. So, I decided to include some “family videos” as well. These videos are meant to demonstrate that all of my breeding dogs can and are turned loose around anyone and anything and though they will willing give their very lives in defend of their family, they are safe and gentle enough to take with you anywhere you go. For in all honesty, what is the use of a personal protection dog if you can’t keep it with you?