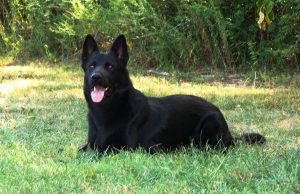 Cora is a SUPER nice black Czech female. She is 1 year old with VERY nice balanced drives. We are extremely thankful to Eurosport K9 for importing her for us. She is everything we were hoping for. She has a very nice working pedigree while also being a good working female herself. She is great with other dogs, fabulous around kids, and great with people but…..she is also showing that she is a force to be reckoned with. She is showing a nice mixture of prey and civil drive. She is very self confident as seen even from the moment she arrived. When we picked her up at the airport, she had been flown across seas, plane hopped a few times, shuffled from place to place, met new people speaking a foreign language and yet when we picked her up, she was playing with the newspaper in her crate and seemed to be having a grand ol’ time. For a 1 year old dog, that is saying quite a bit! 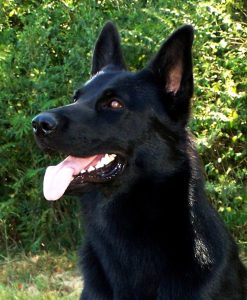 She has been A-Stamp and PennHipped scored already – both of those came back with excellent scores. She will be getting OFA scores when she turns two. For now, we will be spending the next couple of years competing with her but if she does as well as we expect, she will be added to our breeding program as well. Her pedigree includes many tough dogs that are known for producing excellent working dogs. These dogs include (but not limited to): Orry, Ellute Mohnwiese, Tom van’t Leefdaalhof, Yoschy, Majk Anrebri, Grim, Cordon, and Mat Danaru.Cora is one of our top competition females. She is EXTREMELY confident and full of energy. She loves to work and is extremely social. She is almost too solid in her nerve and never meets a stranger. Her pedigree is outstanding with her mother being Connie Orthex – an Orry (WUSVx6, ZVV3) daughter which also carries the ZVV3 title. Her father is Karamel Anrebri, son to Ellute. Other notable names in her immediate pedigree include: Cordon, Mat Danaru, Grim, Warra Gymor, Pike, Gero Chmelovy, Dingo Conneforde, Querry, Frankie, and Tom Leefdaalhof.Drago vom Patriot is a 97 pound of head and muscle. He has tremendous intensity, incredible grips, and brings power, toughness, and a definite “wow” factor. He is a proven stud with many progeny on the ground already showing him to be a nice producer. He was recently imported into the States and we are very glad to have this opportunity.We have great hopes for her! Thanks again Taunya!Cora z Chodského království (AD, BH, FO, P3, PD1, IPO2)
• V Karamel Anrebri and ZVV3 Connie Orthex (2nd Place WUSV) daughter
• Granddaughter to Orry (WUSVx6) and Ellute
Accessibility by WAH