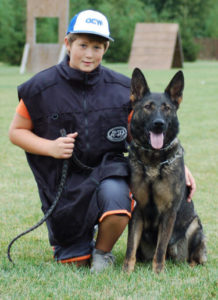 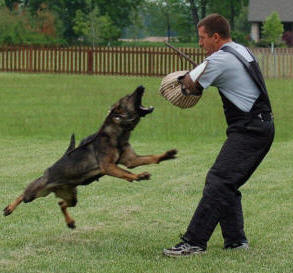 And below are pictures of previous Moira Litters…..

Yoshy is a beautiful black and red male. He is the son of Snoopy von der Fasanerie who is out of the World Champion Quasy von der bosen Nachbarschaft. His mother is Xima von der Eichendorfschule – you may have encountered her elsewhere in the Sequoyah website because she is also the mother to Bonnie (one of our breeding females). Yoshy has a very nice well rounded disposition. He is very good in the work but also has a clear head and nice “off” switch. We expect this litter to produce solid working pups for both work and home.

Moira’s was bred to 2012 World Competitor Irmus Galan Nalag. She delivered these puppies on 9/22/12.

Irmus is a world level competitor and will in fact be representing the United States at the World Competition in 2012. Irmus is a extremely tough dog with tremendous power and drive. He has full, hard, brutal grips and is frequently voted “Helpers Favorite” when competing. He is a strong, natural tracker, and has a strong willingness to please. He is great with both people and other dogs. He is also the son to World Competitor Hoky Va Pe. He possesses a clear head and we are expecting a very strong litter out of this breeding if the previous breedings out of both Irmus and Moira are anything to go on.