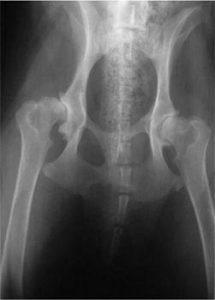 Hip Dysplasia — is a condition in which abnormal formation results in an unstable hip joint. As the affected dog ages, the hip gradually becomes arthritic and may degenerate to cause total crippling of the rear limbs. The exact cause is unknown, but it is believed to develop because the skeleton grows faster than the supporting muscles. The imbalance growth rate is influenced by heredity and diet. Other unknown factors may influence the development and severity of hip dysplasia.

Not all dogs with hip dysplasia are affected to the same degree. The disease can be very mild and cause no signs at all, or it may be severe and crippling. While the disease usually affects both hips, occasionally it only affects one side. Hindleg lameness, a swaying or staggering gait, “bunny-hopping” while running, discomfort on rising, reluctance to climb stairs or stand on the rear legs, and reluctance to run or jump all all signs of hip dysplasia. Though this disease is most common in large breeds, it may occur in any breed. Preventing this crippling disease has been the main focus of our breeding program here at Sequoyah Shepherds. AFFECTED ANIMALS SHOULD NOT BE BRED.

Elbow Dysplasia (Ununited Anconeal Process) — Elbow dysplasia results from abnormal development of the ulna, one of the bones of the upper foreleg. During bone growth, a small area of bone (the anconeal process) fails to fuse (join) with the rest of the bone of the ulna. This causes an unstable elbow joint and lameness that is aggravated by exercise. In many cases, arthritis of the elbow develops later in life.

The long and the short of it is that the growth plate fails to fuse properly and results in the part of the ulna that “locks” into the humeral condyles (the upper leg bone) when the leg is extended, not joining with the long bone of the ulna. It needs to lock in in extension because when the leg is in extension is when the leg is most likely to be bearing weight. Since it isn’t fused, it will tend to wobble more and result in instability in the joint causing DJD (degenerative joint disease/arthritis).

Sometimes it is recommended that the “chip” or the unfused part of the bone be removed as it will contribute to the “wear and tear” within the joint. Other times, some surgeons talk about pinning the bone back together. And still other times veterinarians suggest treating with NSAIDs and monitoring. Not sure how many vets can now do elbow replacement now but that is an option as well. It may occur in one of both front legs. This condition is hereditary — AFFECTED ANIMALS SHOULD NOT BE BRED.

Fragmented Coronoid Process –– The coronoid process is a bony protrusion or prominence on the inside surface of the elbow bone (ulna). In some individuals, faulty development of the elbow prevents the tree bones (radius, ulna, and humerus) from lining up properly. This results in abnormal stresses within the joint, and the coronoid process breaks off.

Fragmentation causes lameness, abnormal gait, mild to moderate discomfort, and with the passage of time, degenerative joint disease (arthritis). While surgery is advised to decrease pain and remove the piece of loose bone, the underlying cause of the fragmentation remains, and the joint gradually becomes arthritic. The rate at which the joint degenerates depends on the severity of the joint misalignment.

This disorder is most common in large breeds and a genetic predisposition is present in the German Shepherd, Rottweiler, Saint Bernard, and the Bernese Mountian Dog. AFFECTED ANIMALS SHOULD NOT BE BRED.

Osteochondrosis (OCD) — is a disease of the cartilage of the shoulder, elbow, hock, or knee joints of young, fast-growing, large-breed dogs. One or more joints may be affected. Lameness first appears at 6 to 9 months of age and may persist for several weeks or months. Lameness may also come and go over a period of several weeks. Males are more commonly affected.

Although the exact cause is unknown, the condition begins as abnormal development of the deep layers of joint cartilage. Most people think that it is a result of both genetics and physical trauma to the weakened joint cartilage during the developmental stage. As the disease progresses, a small piece of cartilage may become detached from the underlying bone leaving a “dip” in the cartilage. Although many animals respond to a combination of diet, exercise control, and medication, some require surgery to remove the disease fragments of cartilage.

Panosteitis — is a disease primarily affecting young dogs of large breeds (most commonly seen in GSDs and German Shepherd mixes). It is characterized by inflammation within the bones, especially the long bones of the legs. Affected dogs may show lameness in one or multiple legs. Many owners describe the lameness as “shifting or changing legs”.

The disease may persist for 1 to 6 months, with the average case lasting 2-3 months. During the course of the disease, periods of pain and lameness are interrupted by intervals of good health. Lameness and the degree of discomfort may vary. Full recovery is to be expected. Your veterinarian can help control the level of pain by dispensing some anti-inflammatory medication.

DJD is characterized as primary when it seems to occur for no particular reason. This type of disorder becomes more prevalent with age, and affected dogs and cats are usually more than 10 years old. The condition seems to result from inability of joint cartilage to repair itself in response to athe effects of aging, trauma, wear, and the individual’s genetic makeup.

Anterior Cruciate Ligament tear (ACL) — A ligament consists of tough fibrous tissue connecting two bones. In the knee, rupture of the anterior (cranial) cruciate ligament allows the femur (thigh bone) to slide back and forth over the tibia (shin bone). The rupture first causes pain, then abnormal wear and tear of the joint, leading to arthritis. Some of the newer research suggests that this problem may have a genetic pre-disposition. Often, when a dog ruptures one ACL, he will usually rupture the other ACL within the following 2 years (approx. 60%). Here at Sequoyah Shepherds, we recommend not breeding dogs with ruptured ACL’s.

Depending on the severity of the rupture, treatment may consist of limited exercise and rest or surgical repair of the torn ligament. At Sequoyah Animal Hospital we routinely handle torn ACL’s and know first hand about the pain and expense involved in the repair.