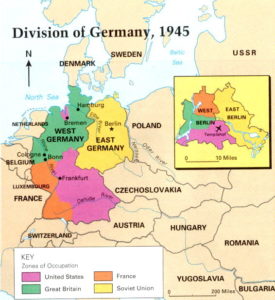 In order to understand how the DDR German Shepherd came into existence, we have to go back to World War II and understand a little of the history of Germany.

By 1941, the Nazi Germany, under Hilter’s leadership had the upper hand, but the tide turned in December 1941 with the bombing of Pearl Harbor. It was then that the United States joined the war and Russia turned to the Allies for support. Because of the invasion their country by Germany, the Soviets joined the Allies, and by late 1944, the United States and Great Britain were closing in on Germany from the West, while the Soviets were closing in from the East. In May 1945, Nazi Germany collapsed when Berlin was taken by Soviet and Polish forces. It is rumored that Hitler committed suicide when it seemed inevitable that the Allies would win.

By September 1945, the German Reich (which lasted only 13 years) and its Axis partners (Italy and Japan) had been defeated. World War II resulted in the destruction of Germany’s political and economic infrastructure and led directly to its division. In the immediate post-war years the German population lived on near starvation levels, and the Allied economic policy was one of de-industrialization in order to prevent any future German war-making capabilities. The U.S. policy began to change at the end of 1946 and by mid 1947, Truman started policies to help stabilize the economy of Germany.

Despite being allies against the Axis powers, the USSR and the United States disagreed about the configuration of the post-war world while occupying most of Europe. A large dispute arose over the boundaries. Because of the different political beliefs between these nations, relationships were strained and thus began the Cold War. The Soviet Union decided to close its borders and this eventually led to the division of Germany into East and West.

The three western occupation zones (U.S., UK, and French zone) would later form the Federal Republic of Germany, commonly known as West Germany. And the Soviet zone became the German Democratic Republic (or Deutsches Demokratische Republik), commonly known as East Germany, both founded in 1949. West Germany was established as a federal democratic republic while East Germany became a Communist State under the influence of the Soviet Union. This fact set the stage for the Cold War which lasted for the next 46 years.

One of the greatest impacts to the German Shepherd breed was, in fact, the onset of the Cold War. 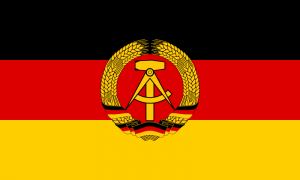 The concept of the Iron Curtain symbolized the ideological and physical boundary dividing Europe into two separate areas from the end of World War II in 1945 until the end of the Cold War in 1991. During this period, these countries were virtually cut off from any outside contact. The government made any and all decisions and this happen to include strictly regulating breeding kennels.

The government controlled the German Shepherd pedigree registration and breeding program because they saw the DDR German Shepherd as a military canine. Extremely rigid breeding guidelines were put into practice. Agree with the standards or not, one cannot argue that it did assure that for almost 40 years only the dogs who met strict criteria were allowed to breed. These standards included powerful, deep chested bodies with straight long backs, intimidating presence and supreme intelligence. Strict standards assured that dogs showing signs of hip dysplasia were not used for breeding. Any litter born was examined completely for teeth, ear set, temperament, coat, etc. They examined them as if they were evaluating a piece of military equipment – Did it meet military standards?

These standards included specific working abilities for these dogs – such as, tracking, athleticism, toughness, climbing abilities, hardiness, and the ability to withstand extreme physical conditions and demands. These strict regulations on the breed resulted in the formation of the DDR Shepherd — breeding lines within the border of the Berlin Wall that had no outside influence and were held strictly to government standards. 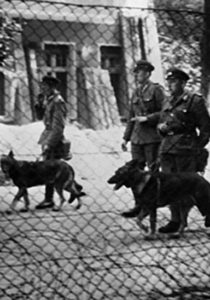 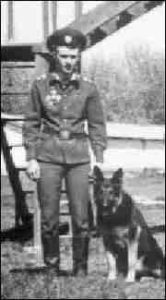 As mentioned before, these government standards included tracking abilities, athleticism, toughness, survival abilities, etc. Other breeding criteria of DDR dogs stated that they could only be bred if they were completely free of hip dysplasia. Unlike West Germany, dogs that had “fast normal hips or worse could not be bred. Dam’s had to appear with her whole litter for an inspection of teeth, ear set, temperament, coat, total overall appearance. The testing criteria of the East was also much more rigid than that of the West Germans. They were bred for strong bones to handle the great distances they would be expected to patrol. They were constantly exposed to the harshest weather conditions to build stamina, a genetic resistance to disease, and ability to function in the worst of weather conditions.

The dogs had be able to scale a straight wall (instead of an incline wall), walk balance beams, search more blinds, track longer and farther – the test were stricter and more physically demanding. Only the best of the best would be able to reproduce.

The breeding criteria as well as the harshness of their environment shaped the look of the East German DDR Shepherd into one of pure intimidation. They had large heads, broad shoulders, deep chests and dark coats. They were truly an fearsome looking Shepherd — the DDR Shepherd was a sight to behold.

The East German national breeding program, as ruthless as it was at times, succeeded. The DDR GSD ultimately exhibited a distinctive look that became different from the traditional GSD. Just as Nazi Germany had strived to create a “Super Race” with their ideology, so had East Germany strived to accomplish this with their national dog. 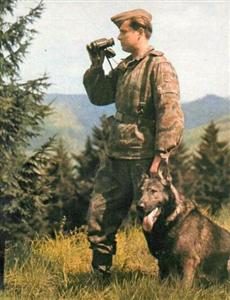 Building the Berlin WallIn 1946, the Soviet Union formed the Grenzschutz Polizei (later known as Grenztruppen) or Border Police. They were in charge of guarding 1,378 kilometers of East German Border.

By the early 1950s, West Germany was rapidly becoming a postwar industrial powerhouse. The Communist domain, however, languished economically. It began to leak skilled workers.

The main border between East and West Germany was sealed. However, because of its four-power status, Berlin remained open. East Germans seeking a better life could still leave for West Berlin and, from there, fly to West Germany. Of 17 million East Germans, 2.2 million fled westward between 1949 and 1961, most via the Berlin “escape hatch.” By mid-1961, this exodus threatened the Communist state’s very Berlin_wall_1existence. Hence, the Berlin Wall. 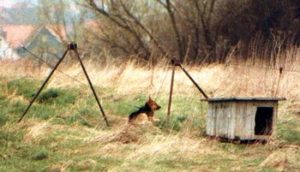 Snaking for almost a hundred miles around West Berlin, the Wall became the Cold War’s most potent symbol. It began 50 yards deep on the East Berlin side, with a high wall greeting potential escapers. Next came an alarmed fence, then dog-runs patrolled by specially trained DDR GSDs. Towers stood every hundred yards, manned by guards with orders to shoot on sight. At the edge of West Berlin stood a final “marker” barrier (the part tourists wrongly assumed to be “the Berlin Wall”).

German Shepherd Dogs at workResponsible now for patrolling the Berlin Wall as well as the East German border, the Border Police accelerated its DDR GSD breeding program. At the end of their first year of forming there were over 3,000 soldiers comprising the unit.

The Grenztruppen and their dogs watched over minefields, border fences; many people will remember Check Point Charlie and the watch towers. Many dog runs or fenced pens also were set up throughout the border — 200-250 dog runs or pens were in Berlin alone! Dog runs covered 97 kilometers of the border deploying approximately 1,000 sentry dogs. The area fluctuated between 90- 120 kilometers. The dog run comprised of dogs being leashed to a suspended line. The dogs in the runs or pens were fed only once in a 10 day period to retain their ferociousness.

More than just a sentry dog, many of these Shepherds served as tracking dogs, and attack dogs. The border patrol also deployed a special DDR German Shepherd Guard Dogdog pack to find deserters of their “cause” in large area searches such as buildings, timber, woods, or fields.

The Fall of the Berlin Wall

In August 1989, Hungary removed their physical border defenses with Austria. This began a chain reaction that eventually led to the fall of the Berlin Wall. Germany began it’s initial stages of becoming a unified nation once more. On June 13th, 1990 the East German military began dismantling the Wall. Free passage between East and West Germany had already been permitted for several months.

No longer needed to help keep the East Germans inside the communist border, many of the DDR border patrol GSDs were sold, abandoned, or euthanized. The Grenztruppen were officially disbanded in 1990. Soon after, much of the rest of the world began importing these dogs from East Germany at a rapid rate. Much of the German populace saw the dogs as a symbol of their repression and others simply had no room or financial ability to maintain the dogs. They were disbanded with alarming speed.

Thankfully, there are still a small handful of DDR breeders left that realize the value of the years of strict East German breeding. These breeders have helped preserve the lineage of this incredible dog and are working to maintain their standards as well. It would be a shame to see this incredible breed of the working German Shepherd disappear. With careful breeding, we have the opportunity to preserve the DDR GSDs with their natural defense drive, tracking abilities, temperament and structure. Renowned for their intelligence, courage, and loyalty, the DDR German Shepherd Dog is coveted all over the world as truly the “Best of the Best.”

The DDR border patrol dogs no longer exists, a historical relic of a bygone time and place, but their great courage, loyalty, working abilities, and devotion to their owner or handler survive throughout their lineage.